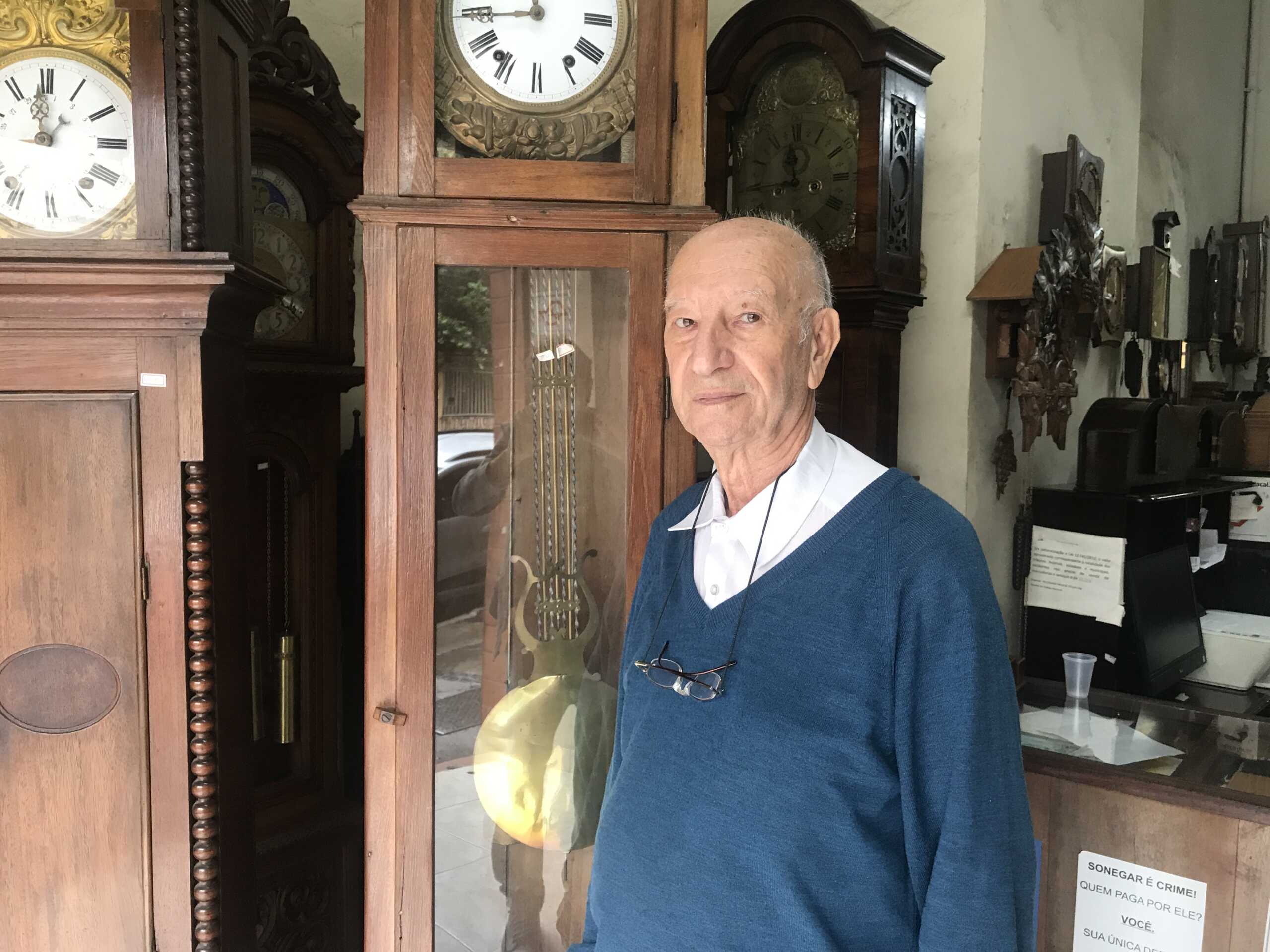 What do you call the service you offer?

I repair old clocks. My service is considered as being rare. It’s a hard job. There are just a few people who do it.

What is the importance of repairing things in your life, in general?

I’m a fighter, I’m stubborn. I want to fix things. Fixing clocks, for example, is like that, a sort of fight, because it isn’t easy to make a watch start to work, sometimes it takes several hours fighting against it. And you have to like what you’re doing, otherwise, it’s worthless. I keep fixing what I can. For example, I had a car, a Chevette 74, I used to dismantle it and put it all together again. To fix the car’s engine 100%, I used to put a cigarette on the top of the engine and so that when it stood still, then you knew the slow gears were good to go.

Is it very different, the clock and a car’s engine?

Now it’s different, because the car’s engine has become very sophisticated. The old ones, if I tried, in about six months I could have dismantled it and put it all together.

Why do you think repairing things is important to society?

It is important because of the following: someone’s father dies and leaves a watch to his son, so the son wants to preserve the watch in the memory of his father, then he fixes that watch to keep it to his family, to his son…We only live once, right?…What has passed, is past, and you don’t know whether the future will bring or not. And by the way: old watches are a thousand times better than the newest that are rubbish. You end up saving money, you know? Because if you’re going to buy a watch today, even a mechanical watch from Germany, it won’t last as long as the oldest ones will.

I wanted to ask you to describe to me how your repairing process is.

The procedure goes like this: dismantle all the machinery, verify if there’s a wear, adjust, make a plug, sometimes you have to make the axis tip, if it’s wore out…you dismantle everything, clean it carefully, lub all the machinery, it’s the same process of a car’s engine, it must have oil. And a good one, otherwise it won’t do!

I wanted you to tell me about the most remarkable fixing you did, throughout all these years of profession.

The one that marked me the most was a client who took his watch to be fixed in England several times, but no one was able to actually make it work. Then, a friend of his said: “Take it to Baltazar, take it to Baltazar!”, so one day he appeared and brought his watch here, and I fixed it. Then he told me: “From now on, I won’t take any watches to England, you are going to fix all my watches. So I fixed lots of his watches, the pedestals and everything else, rare watches, dating from 1600, 1800…now he has passed away, around six months ago.

Are there many people who collect old watches?

There used to be, now there’s only a few left. When I opened the store there were a lot. Wow! A lot of people.

Since when does the store exist?

For how long have you been in this profession?

Do you ever think about retiring?

No.Sometimes I have the will to retire, but what am I going to do next? Sit quietly at home? I’ll become mad! I shall work as long as God provides me with good memory to think, eyes to see, a good body and hands to work.

Do you consider yourself as well-succeeded in your profession?

Thank God, I do, because this has made so much for me and my family. I can’t complain. When I opened this store I had nothing. Now I own this place, I don’t pay for rent, I own the apartment I live in, I have other goods, my sons have graduated…what else would I want?

Did you teach your craft to your son and daughter or to somebody else?

My daughter is a physical educator and my son works with websites. But I have an assistant that works with me for 20 years, or more. Here we never learn everything, we are always learning. Every watch is unique.

If you could describe your repairing philosophy in one sentence, what would it be?

Oh, now you got me…This is hard…Well, my profession is very good, and today we are just a few. Any person who enjoys working has to do it well, to please the clients and to have a customer base. You have got to love your profession. Otherwise, it’s worthless, you better close the doors and leave the market.