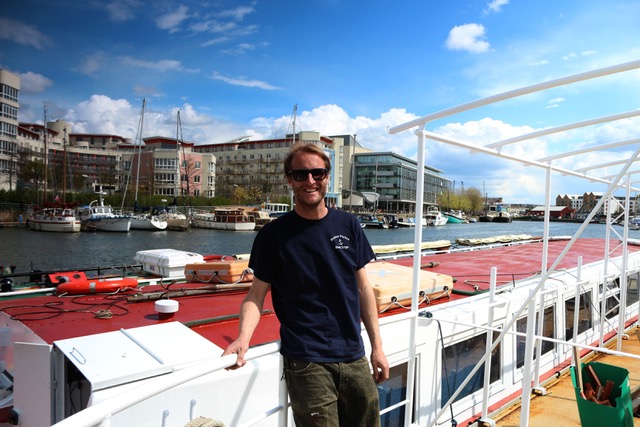 I’m passionate about the marine environment, the sea and Bristol City Docks. I’ve been involved in boats, ships, sailing boats and yachts all my life. I’m the Director of Bristol Packet Boat Trips, a trip boat company that operates out of Bristol City Docks. We operate five passenger boats of various ages, the oldest being the Tower Belle which is 102 years old. We have a narrow boat, the Redshank built in 1936. Our most recent boat was designed and built by ourselves in 2013.

What role does the repair of objects & materials play in your life?

Repair is essential to keep a safe ship, a safe boat. The marine environment is very challenging, as well as wear and tear from our passengers. All of our boats, no matter what age they are, need running repairs and maintenance to maintain their integrity and safety, especially the older ones.

Our oldest boat, the Tower Belle, was built in Newcastle in the 1920s. It had been abandoned and lay derelict and unwanted until it was brought here in 1977, the Board of Trade surveyors passed the boat as sea worthy after a great deal of repair and restoration. It’s a continuous restoration project and needs constant maintenance to keep it up to the standards required for a passenger ship. Every year we have to pull it out of the water, sometimes replacing sections of the hull as the plate gets thinner over time.

The Board of Trade are now under the Marine and Coastguard Agency (MCA) they are the people who issue your licence to operate every year. It’s a bit like an MOT, I have to demonstrate that everything works and show the repairs and maintenance I have undertaken in the previous year. For all our boats.

Can you describe your repairing process?

There are always running repairs to do, we are continuously repairing and maintaining mechanical parts like pumps – fire pumps and bilge pumps, that need constant service because they have to be operational in case of a disaster – fire or taking on water. In case of fire either on your own boat or on the keyside. Also machinery such as winches, cranes, capstans. If you do a repair, you try to mitigate against it happening again by making it better for the future. For example by replacing broken windows with modern safety glass.

We do the major work – like hull replacement – in the off-season (winter). In the summer a repair would often involve working into the night because the boat has to go out again in the morning.

The only difficulty is that some parts are still measured in imperial, and we are trying to swap that out for metric. On the Tower Belle we have a lot of plumbing parts that are all imperial, so we need a set of metric spanners and a set of imperial spanners. Sometimes it might involve a bit of a bodge, you might need to use a lot of tape to get a metric to fit on an imperial, or the other way round. But over time you are trying to update all the systems.

Is there a community of repairers around the harbour?

It’s a working harbour so it has to have working facilities such as the dry-dock and all the people that run it. The yard where boats are pulled out of the water, the crane and crane operators. There are several fabricators and welders that are used for replacing hull, replacing deck, welding new bits of machinery. There’s a ship repair company called Mark Rolts shipyard; they do classic boats, and are mainly carpenters and shipwrights, working with wooden boats and doing wooden repairs. At the bottom end of the harbour at the Underfall Yard is the patent slip where you can pull a boat out of the water onto a slipway to work on it.  There are engineers and metal fabricators and wooden boatbuilders, a marine electrician.

There’s a lot of repair work for people living in the harbour on boats; fixing heating, pumps, sanitary systems.

How do people train to do this work?

Usually people will have worked at sea, on cruise-ships or trained in the navy. They train sailors in the navy to be everything – a fire-fighter, a sailor, an engineer. The best education is to join the navy. There are people that have done apprenticeships in boat-building. One of the engineers here worked on The Balmoral.

Can you tell us about something that you recently repaired?

We had to recently replace a bar on one of our boats. It used to have a bit of painted plywood where the sink was and we replaced that with a piece of quartz, so it will not have to be replaced again or in my lifetime anyway. So it’s an example of something we’ve improved.

Why do you think repair, care and maintenance is important?

It’s the most important part of the business, if I didn’t do it I wouldn’t have a business. The other reason it’s important is to keep the heritage of the boats alive. We need to get away from this throwaway culture, it’s less taxing on the planet and on resources.

If you could sum up your repair philosophy in a few words, what would it be?

It’s essential for safety. Lives and livelihoods depend on it.