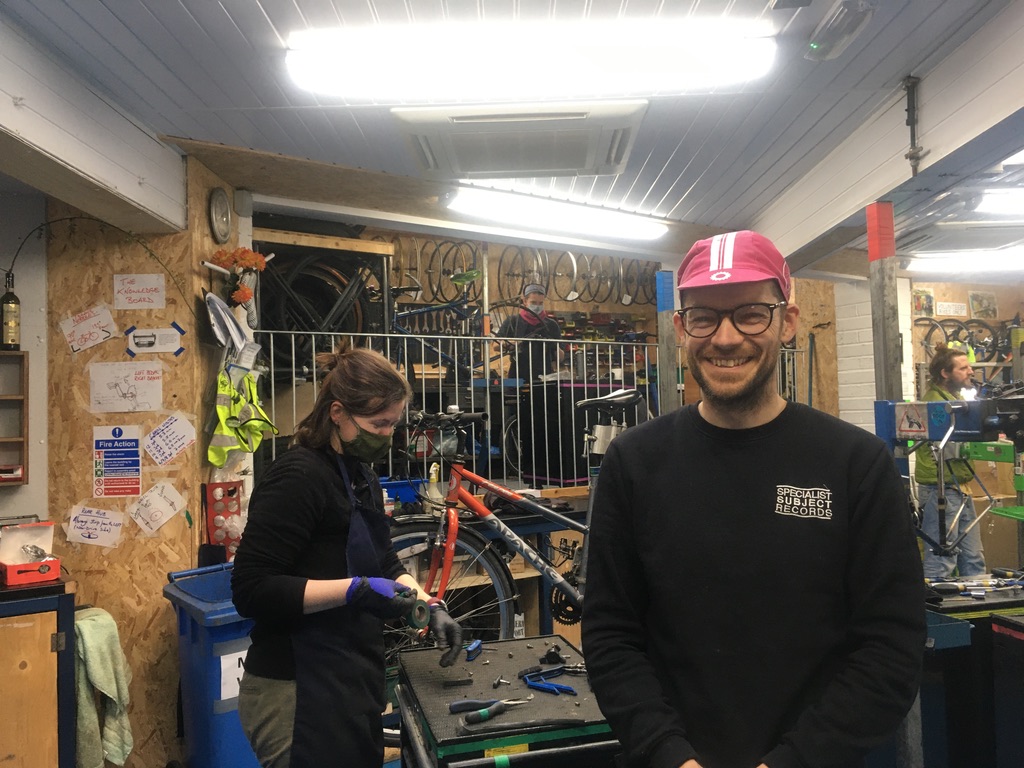 I work at Bristol Bike Project. We are a bike repair co-operative that fixes and re-homes broken bikes. Three days a week I am hands-on repairing things, and one day a week I do the book-keeping. I’m primarily a bike mechanic and for the last 10 years I’ve been working in bike projects that have a focus on reuse and recycling. Prior to that I was an academic doing social science research in environmental psychology, looking at how people interact with the natural environment and how their values affect their behaviour towards the environment.

What role does the repair of objects, living systems, materials play in your life?

A really big role. My paid employment is entirely based around repairing things and in my own time I really love fixing stuff and enjoy the process of fixing for myself, friends and neighbours. My mum is a keen seamstress and taught me how to sew at primary school, so I’ve always mended my own clothes and take a lot of satisfaction from extending the life of stuff. Both for its own sake and for environmental reasons.

Can you describe your repairing process?

There is no one single repairing process, as it depends on what is wrong with the bike. In comparison with a conventional bike shop, where often you see the part that is broken and replace it with a brand new part. Here we would try to replace with a second-hand part, even to the extent of taking apart individual components and re-building them to make them work again. Our labour costs might be higher than other bike shops, but our parts costs are lower, so overall the repair price is the same as a conventional shop. For the Bristol Bike Project it is always better to re-use something if we can, this is also my personal approach to repair.

Can you tell us about something that you repaired, why you repaired it and what it meant for you?

When my wife and I met, one of the nicest repairs I have done is sorting out an old touring bike for her. We do a lot of cycle touring together with that bike, carrying everything we need, tent, cooking equipment. It’s our preferred way of going on holiday.

That was a fun process because it had some personal meaning for me. One of the things I really like doing with bikes is to build something that really suits that person and what they want to use it for. When you buy a new bike it’s an off the shelf thing. Whereas here we have a massive array of bits and bobs – so we can ask – what do you want it to look like? Feel like? How do you want it to ride? That’s our starting point, we are trying to both re-use stuff and provide a bike that really suits somebody’s needs. Being able to do that for my partner was really special.

Why do you think the repair, care and maintenance of (objects) is important?

Because we live in a world of finite resources. As a species we have been tremendously bad at recognising that and its implications for us. Even now when we are really bumping up against those implications all the time in very obvious ways, we still don’t seem to have learnt that stuff is going to run out. Whereas a lot of time I feel pessimistic about the future, it does feel important to try to minimise the impact that we have on resources by reusing as much stuff as we can. That’s the primary driver for me – keeping stuff out of landfill and encouraging other people to do that and enjoy the satisfaction of that.

What motivates you do keep repairing?

The straightforward satisfaction of taking something broken and making it work again and also the knowledge that that is keeping virgin resources in the ground.

If you could sum up your repair philosophy in a few words, what would it be?

Definitely function over form, I want it to work and I want it to be safe, If it looks nice, that’s a bonus, but if it doesn’t – I don’t care. It just needs to work safely.